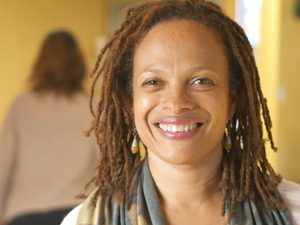 Kimberly Durdin is a Los Angeles based IBCLC (International Board Certified Lactation Consultant), Doula, Childbirth Educator and Student Midwife. She received her calling to support birthing and breastfeeding families shortly after having her first child.

After experiencing Cesarean delivery with her oldest child, Kimberly knew she wanted a different experience with future children. Kimberly was attended by homebirth midwives for her subsequent births, which empowered her greatly to learn how to help other families who were desiring empowered, supportive births and breastfeeding experiences.

Kimberly's experience grew year by year, supporting families as a La Leche League Leader and Breastfeeding Peer Counselor for the WIC program in Brooklyn, NY over 23 years ago. She soon learned about doulas, and teamed up with Brooklyn Doula Service providing post-partum doula care to families throughout Brooklyn. Before she knew it, friends were asking her to be in attendance at their births. Kimberly soon added birth doula to her repertoire.

Upon relocating to the Washington D.C. metro area, Kimberly earned her IBCLC credential. Shortly after receiving her certification, she joined the BLESS Project (Breastfeeding Lactation Education Support Services) at historic Howard University Hospital in creating their first ever lactation clinic providing 24 hour lactation services free of charge for HUH families. Before leaving D.C., Kimberly was named one of the Top Lactation Consultants in the area by Washington Families Magazine.

Kimberly worked as a LC for the Watts Healthcare Corporation 5 site WIC Program after moving to Los Angeles, where she trained staff, oversaw breastfeeding peer counselors, and provided one on one LC care for families throughout South LA. In 2009, She joined the groundbreaking company The Sanctuary Birth & Family Wellness Center, and acted as the Director of Lactation Services and created The Sanctuary New Moms Group, a popular and powerful community space for new mothers that she has lead weekly, as well as conducting childbirth education curriculum for out of hospital birthing families. She taught this class twice a week as well as a program for hospital birthing families she created entitled Enhanced Pregnancy. She has been an LC for fourteen years and has begun teaching a 45-hour Lactation Consultant Exam Prep Course, as well as mentoring IBCLC candidates.

Kimberly recently stepped out on her own, attending births as a Student Midwife and Doula, expanding her role as a birth and breastfeeding advocate, speaker and organizer.After the completion of her studies, She looks forward to opening her home birth midwifery practice for business sometime in 2017. Kimberly offers classes on a regular basis including childbirth education, prenatal breastfeeding classes, workshops and speaking engagements

In 2015 she was awarded Best Lactation Professional of 2015 by Doulas of Southern California and in 2016 given the Student Future Leader Dr Paul Fleiss Award from The Association for Wholistic Maternal Newborn Health & Human Rights in Childbirth.

When not working with the families of Los Angeles, Kimberly enjoys spending quality time with her husband, her six children ages 5 to 24, and her 3 year old grandson. She holds the vision in her life and in her work, that all families deserve access to the highest quality of respectful and supportive care from providers as well as the community, during the childbearing years.