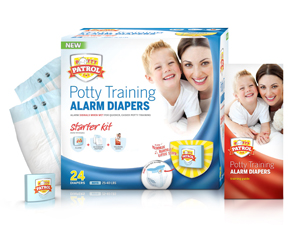 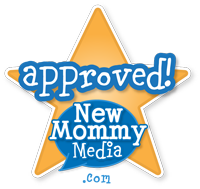 The Potty Patrol Starter Kit is everything you need to begin potty training your little one. The kit includes an alarm (with batteries built in), 24 sensor diapers, and a training guide. Once the Potty Patrol system detects wetness, the alarm alerts parent and child so you can place your child on the toilet to finish. Placing your child on the toilet immediately will help them link cause and effect more quickly and effectively and achieve greater potty training success. Potty Patrol Alarm Diapers sets your child up for success, and saves you time and money.

The Potty Patrol starter kit comes with everything you need to get started with the potty training process. The diapers seem absorbant enough for the process, I'm not sure how they would handle a “big mess”. These are fantastic to begin potty training. You child wets him/herself and the little snap on alarm sounds out and then plays “Twinkle Twinkle”, and you place your child on the potty, so they learn through cause and effect (I wet myself, I need to go potty.) We had already begun potty training in our house, and seem to be dealing with a bull headed subject. He knows and goes when he has to pee (most of the time), but we seem to have hit a road block for doing #2, which this product really isnt helpful for at all. He didnt like the alarm, and continued to pull it off and try to hide it, both in spite and as a joke. I think maybe placing the alarm/snaps in the back of the diaper could have helped that situation. I also did not notice a few times when the alarm sounded, as I was in another room. Actually, even in the next room I often couldn't hear the alarm sounding. A louder alarm, perhaps with a few more choices of song would be useful as well. Overall, it is a really neat product based on a neat concept, and would have been awesome to introduce or start potty training with the little one. However, I dont think its terribly helpful once the basic concepts have been introduced and you are well into the process. Overall, I'd give this product 3 and 1/2 stars, but it probably would've been 4 if I had had this product when we first started.

When it comes to potty-training, I don't think there's a “one size fits all” solution for parents. However, I love the concept behind this product and it offered a great start to potty training my 2 and a half year old boy. The boy diapers fit a little snug, something to consider if your child is larger than average. At first, my son did not like the alarm on the front of the diaper and kept taking it off and hiding it. I suggest letting your child hold the alarm in advance and get used to it before attaching it to their diaper. He liked the song “Twinkle Twinkle Little Star”, and he seemed excited when it started to play and would run to the bathroom. We also printed off some potty training charts from websites mentioned in the instructions, which my son really enjoyed as a reward for going potty, flushing the toilet and washing his hands. Overall, this product was a great tool for teaching my son what the potty is used for. We were able to effectively train him in about two days after using all 24 diapers in the starter kit, however we still use regular diapers for nap time and bedtime.

My oldest son is 26 months old and has been showing interest in his porta-potty. We had not attempted any training until we received our Potty Patrol. The kit came with everything needed and the diapers fit him. It only took a few times for the alarm to go off before he started to associate the urge to go with a trip to the potty. He peed in his potty! As for #2, we made no progress with that. I kept him in a long shirt during training to keep the alarm out of his eyesight. And we snapped the sensor on the diaper before putting the diaper on him. Unfortunately, he started to balk when the alarm went off and would run away from us. It got the point where we would have to fight with him to get him into the bathroom. We took that as a sign that he is not ready, but we have supplies to try again in the near future. It would be nice if the alarm was louder or more of an alarm sound. The Twinkle Twinkle song blends in with all of his electronic toys.